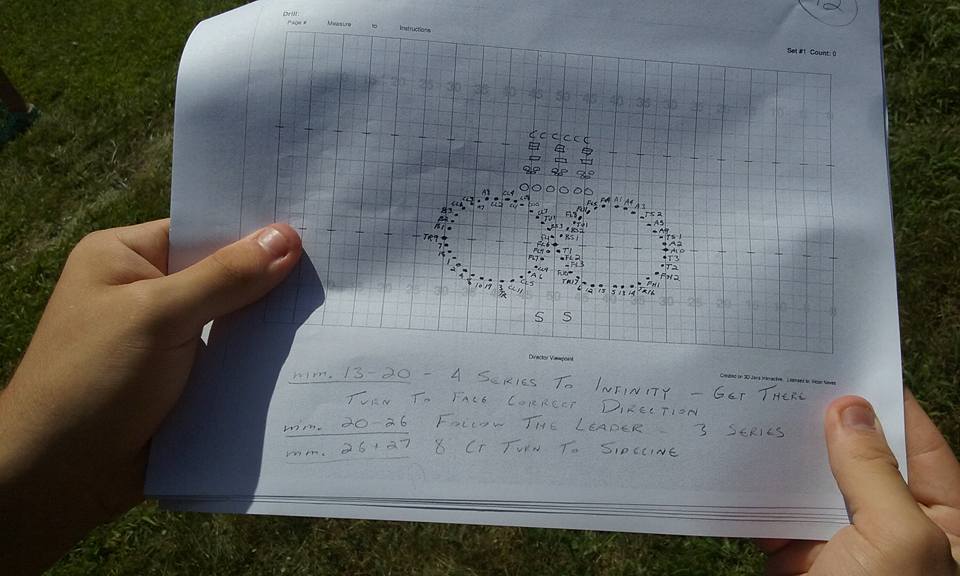 A compilation of band jokes and musical humour I’ve heard over the years because why not. (I actually wrote a good chunk of these myself and I’m somewhat proud tbh.)

Two musicians are walking down the street. One says to the other, Who was that piccolo I saw you with last night? The other replies, That was no piccolo; that was my fife.

An L.A. recording session ground to a halt yesterday when an oboe player – who was constantly sucking on her reed to keep it moist during rests and between takes – inadvertently inhaled and swallowed it. The conductor immediately called 911 and asked what he should do. Dispatch told him, “Use muted trumpet instead.”

A third clarinettist claimed she could play demi­semi­quavers. She proved it by playing just one.

The band’s defintion of “nerd”: someone who owns their own alto clarinet.

A band director went into a novelty shop, hoping for a new find for his model train collection, and something caught his fancy almost immediately. It was a stuffed rat. The man couldn’t take his eyes off it, even from over by the B&O table, and finally inquired about its cost. The clerk replied, “It’s $79.95, but if you buy it, you can’t return it for any reason.” The man thought this was a bit off, but he was really taken by the rat. He paid in full and left the shop.

The man returned to the shop. As soon as he walked in, the clerk exclaimed, “I told you that you couldn’t return the rat!”

The man replied, “No, no – I don’t want to return it! I was just wondering if you had any stuffed alto clarinettists.”

After three missed accidentals and an airy, flaccid solo, the conductor yelled to the horns, “For the love of God, can you give us the F in tune?” ¶ A nearby alto saxophonist piped up and said, “Please, can we have the F-in’ tune, too?”

A marching bass drummer, not being smart enough to use birth control, says to her saxophonist lover, “Honey, I think you better pull out now.” ¶ He replies, “Why? Am I sharp?”

A high-school freshman walks into the band office and inquires about joining the band. The director says, “Sure; you may join the tenor saxophone section.” ¶ The student replies, “But I don’t play the saxophone!” ¶ “Well,” the director replies, “you’ll fit right in!”

One day, a college student went out on a date with a trumpeter. When she came back, her roommate fluttered about and asked, “So, how was it? Did his embouchure make him a great kisser?”

“Nah,” the first girl replied. “That dry, tight, tiny little pucker; it was no fun at all.”

The next night, she went out with a tubist for a change. Upon returning, her roommate inquired, “Well, how was his kissing?”

Yet again, the girl was taken on a date by another musician, this time a hornist. As she entered the dorm, her roommate grudgingly asked, “Well… how was it this time?”

“Well,” the first girl replied, “his kissing was so-so, but I loved the way he held me!”

Definition of senza sordino: a term used to remind a trumpeter he forgot to put his mute on a few bars back.

Little Johnny said, “Mommy, when I grow up, I wanna be a trombone player!” His mother replied, “Now, Johnny, you know you can’t do both.”

Definition of staccato: what a trombonist did with all the ceilings in his mobile home.

The trombone: a slide whistle with delusions of grandeur.

A missionary on an important trip to the depths of the Congolese jungles came upon a lost civilisation, one which has a deep connection with music. Everywhere he went, he heard the constant beat of drums in the distance. He decides to try and convert these people, but the first thing he had to do was learn their language (or vice versa). After three months, most of the city can speak decent English.

To sate his curiosity, he musters some courage to finally approach the chief and ask, “Great Chief, everywhere I go I hear drum beats. Why do you constantly play the drums?”

The missionary, somewhat puzzled, asks, “Do you think there will be a flood, an earthquake, or disease or famine?”

The Great Chief shakes his head and solemnly replies, “Even worse. If drums ever stop, big trombone solo!”

A tubist claimed he could play semi­quavers. He proved it by playing just one.

Two tubists walk past a bar… well, it could happen!

After stopping the band, the conductor says, “Back to bar one.” The tubist replies, “My part doesn’t have numbers.”

Heard backstage: “Will the musicians and the drummer please come to the stage!”

A percussionist, tired of all the percussion jokes, decides to change instruments. He walks into a music shop and says, “I’ll take that red trumpet over there—oh, and that accordion.” After a bit of thought, the shop assistant says, “Okay, you can have the fire extinguisher, but the radiator stays.”

In New York City, an out-of-work jazz drummer named Ed was considering throwing himself off a bridge. On his way to do the deed, he ran into a former booking agent who told him about the fantastic opportunities for drummers in Iraq. The agent said, “If you can find your way over there, just take my card and look up the bandleader named Faisal—he’s the large guy with the beard, wearing gold pyjamas and shoes that curl up at the toes.” Ed hit up everyone he knew and borrowed enough money to buy transport to Iraq. It took several days to arrange for passport, visas, flights and the shipping of his equipment, but he was finally on his way.

Ed arrived in Baghdad and immediately started searching for Faisal. He found in guys in pyjamas of every colour but gold. Finally, in a small coffeehouse, he saw a huge man with a beard—wearing gold pyjamas and shoes that curled up at the toes! Ed approached him and asked if he was Faisal; he was. Ed gave him the agent’s card and Faisal’s face brightened into a huge smile.

“You’re just in time—I need you for a gig tonight. Meet me at the market mear the mosque at 19:30 with your equipment.”

“No time—don’t worry.” And with that, Faisal disappeared.

Ed arrived in the market at 19:00 to set up his gear. He introduced himself to the other musicians, all of whom were playing instruments he’d never seen in his life. At 19:30 sharp, Faisal appeared and hopped on the bandstand, his gilded pyjamas glittering in the twilight. Without a word to the musicians, he lifted his arm for the downbeat.

Faisal shot him a look of frustration and shouted back, “Fake it! Just give me heavy afterbeats on 7 and 13.”

Banjos are to music as Spam is to food.

Jacques Thibault was once handed an autograph book by a fan whilst in the greenroom after a concert. “There’s not much room on this page,” he said. “What shall I write?” Another violinist, standing by, offered the following helpful hint: “Write your repertoire.”

One string bass player was so bad, even his section noticed.

I can’t seem to understand why people keep dropping money in my coffee when I’m rehearsing piano.

A group of terrorists hijacked a plane transporting a major symphony orchestra to Boston. They called down to ground control with their list of demands, and added that if their stipulations weren’t met, they would release one cellist every hour.

A new, budding violist had been in the back desk of a small town’s orchestra for the couple months she’d been there. One day, she found a genie and was granted three wishes. For her first wish, she wanted to be five times better a musician than she already was. By the next rehearsal, she was principal of the violists. After some time, she thought, “I could do better.” So, she asked the genie to be ten times better a violist than she already was. The next day, she arrived as principal violist of the Chicago Symphony Orchestra. A few months later, she thought, “You know, I think I wanna be even better.” She asked the genie one last time to be fifteen times better of a musician. The next Monday, she found herself back in her small town’s orchestra in the very back of the violin section.

Opera is when a guy gets stabbed in the back, and instead of bleeding, he sings.

I’m indebted to a London paper for its excellent headline-like summaries of various operas:

A pianist and a singer are rehearsing Autumn Leaves for a concert. The pianist says to the singer, “Okay. We’ll start in G minor, and on the third bar, modulate to B major and go into 5/4. When you get to the bridge, modulate back down to F# minor and alternate a 4/4 bar with a 7/4 bar. On the last ‘;A’ section, go into double-time and slowly modulate back to G minor.

The singer says, “Wow, I don’t think I can remember all that.”

The pianist replies, “Well, that’s what you did last time.”

Arnold Schönberg walks into a bar. “I’ll have a gin, please, but but no tonic.”

A Martian walks into a record store and says, “Take me to your Lieder.”

In the obituary section of today’s newspaper: Local blues musician didn’t wake up this morning

Blues: Played exclusively by people who woke up this morning.

World music: A dozen different types of percussion all going at once

Opera: People singing when they should be talking.

Rap: People talking when they should be singing.

Classical: Discover the other 45 minutes they left out of the TV advert.

Folk: Endless songs about shipwrecks in the nineteenth century.

Big band: Twenty men who take it in turns to stand up plus a drummer.

House: Okay as long as it’s not the house next door.

Two back-desk orchestral musicians go fishing and one falls out of the boat. He screams, Help, I don’t know how to swim! His partner replies, Just fake it!

A few outrageous musical arrangements I’ve seen within my life:

A C, an Eb and a G go into a bar. The bartender says, Sorry, but we don’t serve minors. So, the Eb leaves, and the C and G have an open fifth between them. After a few drinks, the fifth is diminished; the G is out flat. An F comes in and tries to augment the situation, but is not sharp enough.

A D enters the bar and heads straight for the restroom, saying, Excuse me; I’ll just be a second. An A comes into the bar, but the bartender isn’t convinced this relative of C isn’t a minor. Then the bartender notices a Bb hiding at the end of the bar and exclaims, Get out now! You’re the seventh minor I’ve found in this bar tonight!

The Eb, not easily deflated, comes back to the bar the next night in a three-piece suit with nicely shined shoes. The bartender says, You’re looking sharp tonight; come on in! This could be a major development. This proves to be the case, as the Eb takes off the suit—and everything else—and stands there au naturale.

Eventually, the C sobers up, and realises in horror he’s under a rest. The C is brought to trial, is found guilty of contributing to the diminution of a minor, and is sentenced to ten years of D.S. without Coda at an upscale correctional facility. On appeal, however, the C is found innocent of any wrongdoing, even accidental, and that all accusations to the contrary are bassless.

The following are stories and answers to test questions accumulated by music teachers in the state of Missouri (which are, quite sadly, 100 per-cent real):